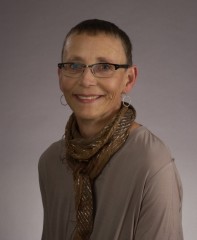 Gail has been an Operations Committee member, Evidence Support Working Group Co-lead and cares a great deal about the health care system as a way of supporting people in having good health and good lives.

Gail MacKean, of Calgary, AB, holds a Masters of Pubic Administration from Carleton University. She also holds PhD in Health Research from the Department of Community Health Sciences at the University of Calgary, a department that she notes is focused on developing health-system researchers.

Gail’s interest in health started at an early age. Her mom had a chronic, disabling condition in which treatments didn’t always help. Interacting on her mother’s behalf gave her exposure to the system. As a child of a Royal Canadian Air Force member, she grew up across Canada. Being exposed to a number of provincial health systems, she noted many of the common challenges they have.

Her professional work began as a physiotherapist in Ontario. When her son was born with complex medical challenges, Gail once again became a person helping a family member who was a patient in the system. During the 1990s, she sat on the parent advisory committee for the Calgary Children’s Hospital, at a time when child- and family-centred care were new concepts. At the core was the idea that health services exist for people, and those people need to be involved in the decisions affecting them. She researched family-centred care as she finished her PhD.

She became involved with ICN after conversations with Judy Birdsell, about different ways that patient citizens and patient advisers could work collaboratively and effectively with health-care organizations. With more than 10 years of experience in patient advisory, Gail knew it was a lot of work. She, Judy and others, asked, “Is there another model, a group led by citizens who care, who can work with the system, instead of being advisory to the system?”

This small group with deep connections and experiences – personal and professional – to the health care system were driven to make it better. “We thought we needed a strong citizen-led group to advocate for meaningful change in health care, both for people working in the system, and of course for those of us who need to use it.”

Imagine Citizens Network launched in part with the story of her son, Sam. “Its key theme is how do we design health-care systems where the ultimate goal is for patients (people),” she said. “It’s about supporting people to have the best life they can. At very least we want to deliver services in a way that doesn’t unduly interfere with people living their life.”

The Evidence Support Working Group keeps an eye on research and helps support evaluations. She said the group supports the need to “… pay attention to what we know from research evidence and other evidence, to help inform how we can make our health care system better.”

“We purposely define evidence very broadly, which we define in our working group’s terms of reference. What do we know from the research to put in place to make a system that provides good care and also improves it? We also pay attention to what we know from practice, and from what is and isn’t working for those working in the system, and the patients; what do we know about what works well, what is not working well, and what might work.”

Gail says there are growing bodies of evidence from both research and practice to draw on. “When people turn to ICN, we have something to say based on our experience. That is why we want to evaluate when we engage with people outside ICN, so we learn from what we’re doing.”

In her personal time, Gail loves podcasts and being outside:  walking, running, swimming, cross-country skiing and skating.  When asked what books she has recently read about health care or health-care reform, she cites Being Mortal – medicine and what matters in the end, by Atul Gawande, and Better Now: Six Big Ideas to Improve Health Care for All Canadians, by Danielle Martin.

She shared a cherished quote from her son when he was 14 (13 years ago), about his concerns about having to transition to the adult system in a few years’ time:

“My greatest fear is that I’m going to be treated even more like a test subject. It seems typically that doctors in the adult system have less compassion to the human being, than the children’s hospital…So recognize that the people you are diagnosing are in fact people, and human beings just like yourself.”